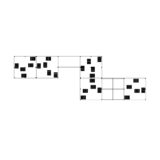 Spanish suburbs are a monotonous landscape of abandoned concrete structures. At a time when there is once again a demand for burial grounds far away from the city, interest in these premature ruins has been increasing: would it be possible to recycle these empty shells by transforming them into cemeteries?
The proposed project understands that the deterioration of such buildings is an intrinsic element of the operation. The buildings will be encased in an outer layer made from debris found nearby, built from recycled wire mesh and corrugated bars. Coffins and funerary urns will be placed gradually into the skeleton of the building following a particular pattern that will ensure the even distribution of the weight over each floor. The structures of the abandoned buildings, built to support 2 KN/m2 according to the Spanish Technical Building Code, would eventually collapse. A huge pile of debris would ultimately bury the building as if it were an enormous modern tumulus.
In 1984 Enric Miralles and Carme Pinós won a competition to replace and extend the old Igualada Cemetery. In the proposal, “Miralles gave time factor an instrumental role, since it allows people to imagine the growth of the foliage and tree trunks until the gap is closed up; at that moment the whole cemetery would disappear, turning into a huge communal grave with a green carpet posing as a discreet gravestone covering. In the end, the cemetery will once again (…) be underground: one sole grave recaptured, occupied by vegetation, thus achieving the long-awaited return to the earth.”
The Cortijo de las Colonias estate is part of the scenery in Barranco de Víznar. The remains of an old mill and two pools shape a landscape dotted with olive trees. A staggered, gleaming path leads us to the old pool. The last stone looks twisted compared to the others. Water flows over the words of what appears to be a poem. Architect Carmen Moreno Álvarez’s minimal intervention in that tragic enclave makes it possible to follow Federico García Lorca’s final steps. It is easy to imagine that in many years, similar feelings will be rekindled by someone discovering a little gap on the brink of closing up in the outskirts of Igualada.
After many years of operation, the landfill site in Vall d’en Joan was closed down. In 1999, a team of architects from Battle i Roig Arquitectes developed a system by which they intended to totally seal off the dumping site. Through the recycling of debris, the project created several platforms and paths that provided access to the Parque Natural del Garraf. By 2010 the landfill had been completely reintegrated into the landscape.
The successful project in El Garraf, as well as the poetic and forthcoming sentiments felt by walkers in the outskirts of Igualada, serve as a catalyst for reproducing these experiences in the thousands of abandoned structures around the country: the outer layer made of debris covering the skeletons of the buildings, put in place at the start of the procedure, would cover the grave once the building had collapsed. Given time and the growth of vegetation, the elevations that would emerge in the outskirts of the cities would be covered up, creating a wide green belt of up to 200 metres in which the construction of new buildings would be prohibited. The mountain of debris would become a protection tool against future urban growth and development thanks to the displacement of the house-temple-grave vector.