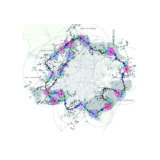 Introduction
The urban planning developments of the past 20 years have not been completed and have set up the expansion of the city of Madrid in a kind of apocalyptic landscape. A landscape shielded by unconsummated financial interests and the obsolescence of a still existing legal framework that soley supported the developers and designers that planned it.
La Ruta Más Astuta [LRMA] is configured as a territory with the legal regime of a free zone ring. It will have customs, borders, tax benefits, new tax regulations and exceptions to the Organic Law of Construction. The aim is promoting cultural and economic development at the periphery of Madrid and transforming an indeterminate, abstract, desert and uninhabited peripheral territory, into a real, sheltered, playful and productive landscape.
In addition, tourism in Spain, as an economic sector within the service sector, accounts for 10% of GDP of the country’s economy and therefore presents itself as a strong potential for growth and development. Given such potential and the fact that Spain is one of the main tourist destinations worldwide, LRMA aims to promote the territory’s resources identified as obsolete and defend the local identity establishing the necessary relationships between this sector ( services) and the rest. In this way, it aims to develop that economy linked to the local identity, generating a coexistence of economies and resources.
This plan aims to set the legislative framework for the creation and management of LRMA in Madrid, which is defined as a productive and leisure ring for the city (…).
[Excerpt from the Plan of the Madrid periphery for the development of the free zone ring La Ruta Más Astuta (or The Smartest Route) (PdRMA)]
5 The project
1. Origin
The project is based on the identification of the two sides of the peripheral post crisis landscapes in Madrid: on one hand, abandonment; on the other hand, landscape potential; both identified in the unfinished and paralyzed PAUs (urban development projects) as a result of the economic crisis, but also identified in other nearby peripheral sites (poles of attraction); that create a ring around the capital.
2. Laws
The basis of the project is presented as a urban development plan (PdRMA). It’s total area covers 4,000 ha along an annular route of 80 km with a varying width between 500 and 1000 m around Madrid. It states a series of rules, strategies and modes of intervention that can be summarized in 9 points and located on a legislative map. Subsequently, a series of evolutionary hypotheses are visualized and developed according to the PdRMA.
3. The Objects
In order to visualize the future hypothetical developments, a series of physical structures are designed as part of a technical catalogue.
4. Hypothetical developments
Based on the previous points, two hypothetical future scenarios are visualized: one in a 30-year time, and the other in a 60-year time. In the first one, the basic infrastructure is settled according to the PdRMA, and the historical uses of the land are reimplemented. LRMA becomes an urban platform where recreational and productive activities interact with each other.
In the second hypothesis, the Route explodes. Uses and activities overlap with each other to achieve the maximum disorder within its boundaries.
Communication: The Magazine